“WHERE LEGENDS ARE FORGED”

We have had many requests from our audience to present EVERYTHING RYDER CUP.  The hype around this years Ryder Cup is explosive, which is par for course, for EVERY Ryder Cup.  We are going to bring you everything you need to know about this great competition.  The

History of the Ryder Cup – Founding of the Cup

In 1920 James D. Harnett, who was a writer at the magazine, had the idea of a competition between America and British featuring 12 man teams.  He sent a letter to the PGA of America and they liked the idea.  His thought, was to have this tournament a few weeks prior to the British Open, as a warm up tournament to the British Open.  On May 24th, 1921 a team of 11 (James Douglas Edgar was the 12th who was already in the UK) sailed on the ocean liner RMS Aquitania en route to the United Kingdom.

The first Ryder Cup match was played at Gleneages on June 6th.  The inaugural match consisted of 5 foursomes in the morning and 10 singles in the afternoon.  The match was won by Great Britain by 9 matches to 3, 3 matches being halved.

Team Composition – How they are picked

The United States Ryder Cup team is picked primarily from the Ryder Cup points list is a fancy way of saying – the leaders on the money list for key tournaments of the current season.  The breakdown is as follows:

Captain’s Pick’s – The United States captain will pick 4 additional players to join the team, which is announced after Tour Championship of the current year.

The European team is selected a bit different than the United States Team.  Here is a breakdown of team selection for Europe:

Event Format – How it works and How to win

When is the Ryder Cup and how long does it last?

The Ryder Cup is played in even-numbered years and in the odd years “President’s Cup” is played.  It is played at the end September and starts on Friday and ends on Sunday.

When a team is leading by the same number of points as holes remaining it is called “dormie” which means the only need to win or half one more hole and the worse they could do would tie.  For example – if a team is up by 3 points with 3 holes remaining the team is “dormie.”

What is the Ryder Cup format?

How does a team win?

Each match is worth one point, with the matches ending in a draw are worth 1/2 point for each team.  The first team to reach 14 1/2 points is crowned the RYDER CUP CHAMPION!  Interesting enough if the matches end in a 14-14 draw, the team who is the current Ryder Cup champion retains the cup.  Technically the match is considered a draw and no one is termed the “winner” which makes sense as to why the Ryder Cup stays with the previous team.

This has happened twice over the Ryder Cup history:

If you have ever wondered why you see many players not finishing their putts on some of the holes it’s because the other team “concerned” the hole or the stroke.  Basically the other team has a “gimme” and is pretty much guaranteed to make the next shot, which is almost always a putt.  The opponent picks up his ball, takes the score he would have made on the next stroke and moves to the next hole. 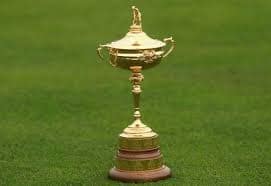 If you are anything like us at here at BreakfastBalls.Golf you LOVE the Ryder Cup and everything it represents.  Team work, unity, competition, and FUN.  We count down the days leading up to this event and we watch EVERY stroke until the new Ryder Cup Champion is crowned!